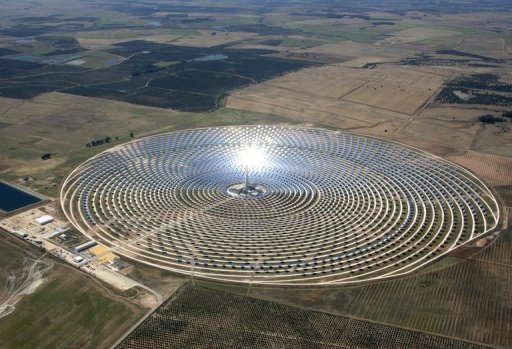 Unit 3 has been about Energy Transformation. Using what we know from Chapter 3.2 in the new textbook, complete the following:

Using the internet and your amazing curiosity, research one of the following, and submit a paper copy or to my email (carlsommerfeld@gmail.com, with the following subject: Unit 3.2 Assignment, Block (and include your block please 2.3 or 2.4). Due next class or Monday March 4th 11:59 pm to my inbox.

Choose one of these:

The format isn’t important, use Prezi or Google Slides to make it interesting, or just do it point form if you’re busy. Be prepared to share some of your information with your classmates in a friendly Q and A, and even participate in a game of Kahoot later! We used CP Day today to look up any genetic disorder, but hopefully you looked at pages 12 and 13 in your DNA booklet.

Point form is fine, be curious; consider covering the Who Where What Why and How of good journalism. There is a template in an earlier post, just search research paper template if you need more guidance.

PS please be prompt to Friday’s class as UBC (Young Women for Science) is coming to do a presentation with our class.

Appeal of order for $1M security fee from plaintiffs in Chevron case to be heard in Toronto Oct. 10 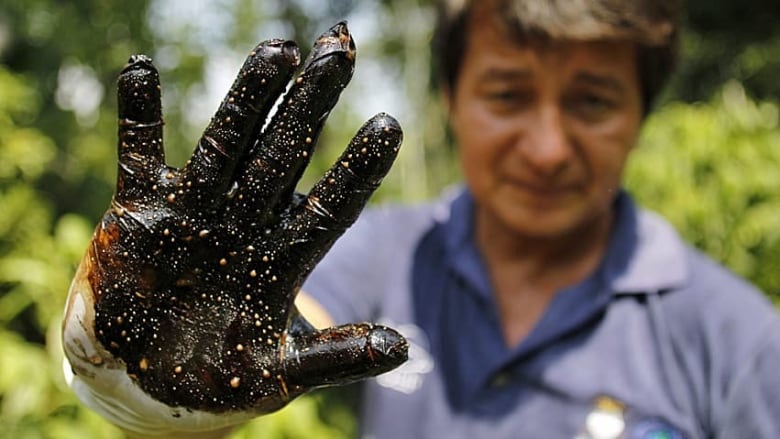 Environmentalist Donald Moncayo shows his glove after conducting a test made on an affected field in Ecuador. (Guillermo Granja/Reuters)

A legal battle between Chevron and Indigenous villagers from Ecuador, spanning several decades and across three countries, is now playing out in Canada as Ontario courts consider whether to enforce foreign judgments here.

In 2011, Chevron Corp., the third-largest oil company in the United States, was ordered to pay $9.5 billion by an Ecuadorian court to compensate 30,000 Indigenous villagers living in the Lago Agrio region of Ecuador for environmental damages.

The villagers claimed Chevron was responsible for extensive environmental damage caused by oil-drilling activities by Texaco, Inc., which ended more than 20 years ago and before Chevron acquired Texaco in 2001.

In 2011, Chevron was found guilty for the dumping of billions of gallons of oil and toxic waste into the Ecuadorian Amazonia region, where Texaco operated for 25 years.

Chevron hasn’t operated in Ecuador since 1992 and no longer has assets in that country, so the plaintiffs went to a U.S. court in order to have the judgment enforced.

However, Chevron filed suit against the plaintiffs and their legal team in the U.S. under the Racketeer Influenced and Corrupt Organizations Act (RICO), alleging that the Ecuadorian judgment was obtained through corrupt means.

A Southern District of New York court ruled in 2014 that the Ecuadorian judgment was a product of fraud and racketeering activity, rendering it unenforceable in the U.S.

Chevron then requested the plaintiffs pay a $1-million security fee to cover anticipated costs before the case proceeds. That was approved by the court, but an appeal of the ruling will be heard Oct. 10 at the Ontario Court of Appeal in Toronto.

Chevron disputes the original judgment from Ecuador and says it shouldn’t be enforced in Canada.

“This [lawsuit] was a scheme. [The plaintiffs] were hoping that Chevron would just settle and pay them out,” said Crinklaw.

“In the U.S., the Ecuadorian judgment is fraudulent and cannot be judged. It’s a fact, the courts found it to be so,” he said.

“Since they can’t enforce it in the United States they are going to other countries around the world to try to enforce it.” 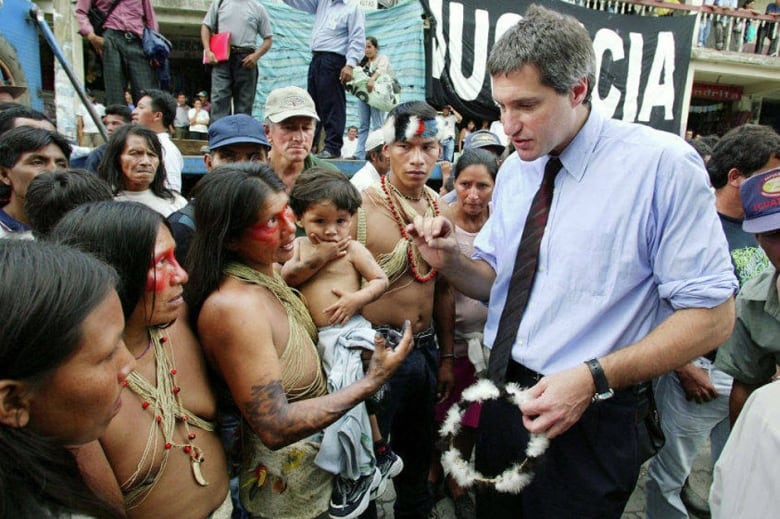 Head lawyer for the Ecuadorian tribes Steven Donziger meets with villagers in the Lago Agrio region affected by the oil pollution in their traditional territories. (stevendonziger.com)

The Lago Agrio legal team has also filed applications to enforce judgment against Chevron in Brazil and Argentina, in attempts to gather the multi-billion dollar settlement.

Steven Donziger, a New York-based human rights lawyer who is leading the case against Chevron, says that Chevron has used heavy-handed tactics in fighting the case.

Donziger alleges he has been the target of colossal economic power from a single corporation directed against an individual.

“They sued me for $60 billion before dropping all damages claims to avoid a jury in the RICO matter — the largest amount an individual has been sued for in the history of the United States,” he said.

Chevron maintains it is not responsible

Ultimately, Chevron reiterates that it is not responsible for the damages caused by the pollution in the Amazon.

“This group of American trial lawyers and others are trying to use Canada’s judicial system to enforce a fraudulent and illegitimate Ecuadorian judgement,” said Crinklaw.

Chevron asserts Texaco did its part to clean up oil-waste pits and other environmental damage. In 1995, Texaco signed an agreement with the Ecuadorian government and agreed to clean up the waste, and in return was released from any further liability.

However, Donziger said Texaco’s cleanup was inadequate and that its workers merely pushed dirt over leftover waste pits.

According to reports commissioned by the plaintiff’s legal team, higher than normal cancer rates are on the rise among villagers living in the Lago Agrio area of Ecuador.

The lawsuit represents 30,000 claimants who say they have been affected by pollution from the leftover oil fields. Many don’t have access to clean drinking water due to contamination. The plaintiffs were not signatories to the agreement made between Texaco and the Ecuadorian government.

Crinklaw said Texaco’s former partner in the oil production industry in Ecuador, the state-owned company Petroecuador, is responsible for the remaining reclamation.

“The people of Ecuador and the trial lawyers claiming to represent them should be pursuing Petroecuador and the government of Ecuador for their responsibility for cleaning up whatever exists on the ground today,” said Crinklaw.

But Donziger insists Chevron is using stall tactics to avoid paying what is owed to the plaintiffs who have long awaited compensation. He says the $1-million security order is unjust as the already poor villagers do not have the money to pay it.

“Remember, we won the case [in Ecuador],” said Donziger.

“It was affirmed by Ecuador’s highest court.… All we are doing now is collecting the judgment against a scofflaw debtor trying to run from the law. Chevron cannot, in Canada, relitigate issues it already raised in its preferred forum of Ecuador and lost.” See moodle or my newer blog for the original case as reported by CBC: