One of the most remarkable events in the history of the Vancouver School District involved the Vancouver High School Cadets Corp, which was created in November 1903. In 1911, the Commanding Officer of a contingent of visiting cadets from Australia invited the Vancouver High School cadets to do a return visit to Australasia. Six months later, 64 cadets and two commanding officers embarked on a voyage to Australia and New Zealand aboard the ship ‘Zealander’. They would be gone for five months.

This ambitious endeavor was very much a product of the times. Canada’s connections to Great Britain, Australia, and New Zealand were strong. But that connection held major consequences.

In Europe, there was fear that a major war could break out at any time. In 1907, Great Britain had joined an alliance with France and Italy. This was in response to the formation of an alliance comprised of Germany, Austria Hungary, and Italy. If war broke out between the two alliances, Canada, Australia, and New Zealand would find themselves automatically at war due to their status as Dominions of Great Britain. Military authorities in Canada, New Zealand, and Australia saw a visit by Canadian cadets as a way of strengthening ties among the three countries, and with Great Britain.

The fears were soon realized. In the summer of 1914, just 18 months after the Astralasian Tour ended, a major war broke out in Europe following the assassination of Arch Duke Ferdinand of Austria Hungary by a Serbian nationalist. On  August 04, Great Britain and its Dominions joined the fighting. World War One had begun.

Fifty-three of the sixty-four officers and cadets who participated in the Astralasian tour fought in World War One. Of these, twenty-one died. 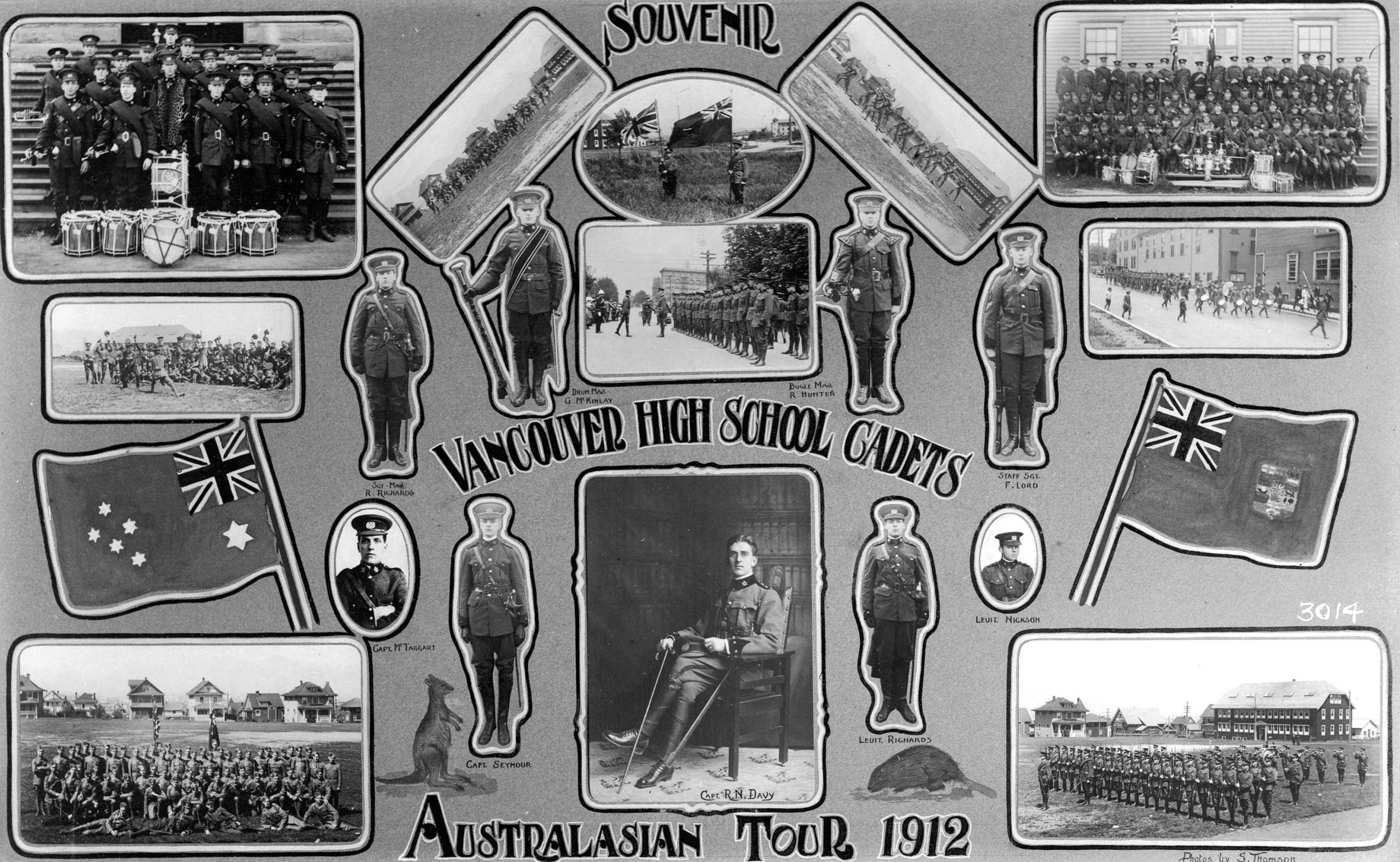 No. 101, Vancouver High School Cadet Corps, the first cadet corps in Vancouver, was established by authority of the Department of Militia and Defence in November, 1903. It was attached to the 6th Regiment, “The Duke of Connaught’s Own Rifles”, and, with Cadet Captain T. Pattison, commanding, was under the paternal care of the indefatigable Sergeant-Major A. C. Bundy, W.O., of that regiment…

In December, 1911, Lieut. J. J. Simons of the visiting Australian Cadets extended an invitation to the Vancouver High School Cadets to visit in Australasia. Six months later, on July 10, 1912, 64 cadets and two officers of the D.C.O.R., embarked on the Canadian Australian liner “Zealandia” for the Antipodes. The complement and itinerary follow:

It was a memorable journey. Paul N. Whitley, Principal (1941), Point Grey Junior High School, thus portrays the incidents and significance of a visit that has left its mark in records of Empire:

On July 10, 1912, amidst the cheers of hundreds of relatives and friends, Captain R. N. Davy, commanding, Captain George Gibson, Medical Officer, and the complement of cadet officers and cadets, as recorded above, embarked on the R.M.S. “Zealandia”.

On board ship, Captain Phillips of the Zealandia became the “father” of the party, and his great interest in the boys won him their friendship. The ship made a brief pause in Victoria. look on a few more passengers, and then headed into the Pacific. The long journey was broken at Honolulu, Suva, and again at Auckland. At every port of call some new experience awaited. The modern educational maxims, “learn by doing” and “learn by seeing”, were given full scope. Trade winds, westerly winds, tropical fruits, and vegetation, native peoples, flying fishes, whales, ships at sea, doldrums, storms, marine sunsets, the Southern Cross, and many lasting experiences filled the mental note books of the cadets.

Daily drill programmes on board ship, at the equator, King Neptune’s arrival, a native overboard with her small son, concerts, church services by the Captain, inspections, boat drills, sleeping on deck, pillow fights, spar fights, deck games, and a multitude of other activities allowed no time for homesickness.

On Sunday morning, August 4, 1912, the Zealander docked at Circular Quay, Sidney, N.S.W. the cadets were greeted by unbounded enthusiasm. In the months that followed, every important city in every state of Australia except Queensland was their host. Civic, military and government authorities everywhere welcomed the boys in the name of their country. From New South Wales to Western Australia the story was the same. Lieutenant-Governors, Lord Mayors, Prime Ministers, military leaders, industrial leaders, all united in one great Australian welcome.

The boys put on many displays and entertainments; they demonstrated lacrosse and ice hockey to the Australians, and learned to play cricket and Australian football. Formal banquets, kangaroo hunts, motor car tours, special coach rides on state railways, state functions and family parties, all combined to occupy every waking hour. Inspections of coal mines, gold mines, lumber camps, farming areas and stations (sheep ranches) all became part of the routine of the busy five months. Private dwellings became “homes” to the boys wherever they went.

Western Australia, the home of the Young Australia League and of J. J. Simons, the beloved “boss” of the boys when they had visited British Columbia in 1911, was host to the party for nearly one month, and in this state entertainment reached its zenith. From Australia and Tasmania to New Zealand the journey continued. Each mile offered new experiences and new beauties, and everywhere the hospitality of the people was most marked. On December 12, 1912, after five memorable months, the 101st Cadet Corps returned to Vancouver, where cheering relatives and friends gave the cadets a royal welcome. It is significant that the Honor Roll of King Edward High School includes the names of almost the full strength of a unit which journeying abroad, had given much of Canada to sister Dominions and, coming home, had brought with it vivid  memories of happy weeks spent  in  the homelands of gracious and hospitable people.

Great War I. took its toll of the boys and Great War I threatens to reduce the number still further. Time, too, has thinned the ranks.  But neither time nor war can erase the lasting imprint of a tour which forged yet another link in the great chain of Empire.

In the memorial park of Western Australia is an avenue of trees, each bearing the name of a member of the Young Australia League who fell in the Great War. As honorary members of this body, the names of the Vancouver Cadets who lost their lives in service are so recorded.

That the years have not erased the memories of the happy days of 1912 is the substance of the following greeting by J. J. Simons:

Although twenty-eight years separate us from 1912 there are many memories of Vancouver Cadets retained in Australia. Australians in every city of the Commonwealth felt privileged to give the glad hand and a warm-hearted welcome to sixty-seven sons of Canada from the 101st Cadet Corps of Vancouver. Their visit was to reciprocate the hospitality extended to boys of the Young Australia League who spent the Christmas of 1911 at Vancouver.

Their coming symbolized the unity of thought, constancy of purpose, and loyalty to the same Motherland, which characterizes citizens of the Empire in all parts of the world.

To the inspiring rhythm of marching bands and the accompaniment of cheering crowds, these young Canadians made their friendly invasion of Australia’s great cities and towns.

They were received on their travels in hundreds of homes throughout Australia, and today the story of their coming has been passed on to younger generations in a way that indicates that the bearing of these young representatives of Canada left behind an enduring memory.

It was ordained that many Canadians on that tour met Australians again on the battlefields of Flanders in the Great War, and, with their blood, attested the love of those things for which the Empire stands.

When peace reigns again, it is hoped that this exchange of visits will be resumed, and that Canadian and Australian boys will fraternize anew, and thus quicken the spirit of brotherhood that units Empire citizens though by wide oceans divided.

The Young Australia League has pleasure in extending a greeting to the youth of Vancouver, a city which was so worthily represented by its boys of former days. 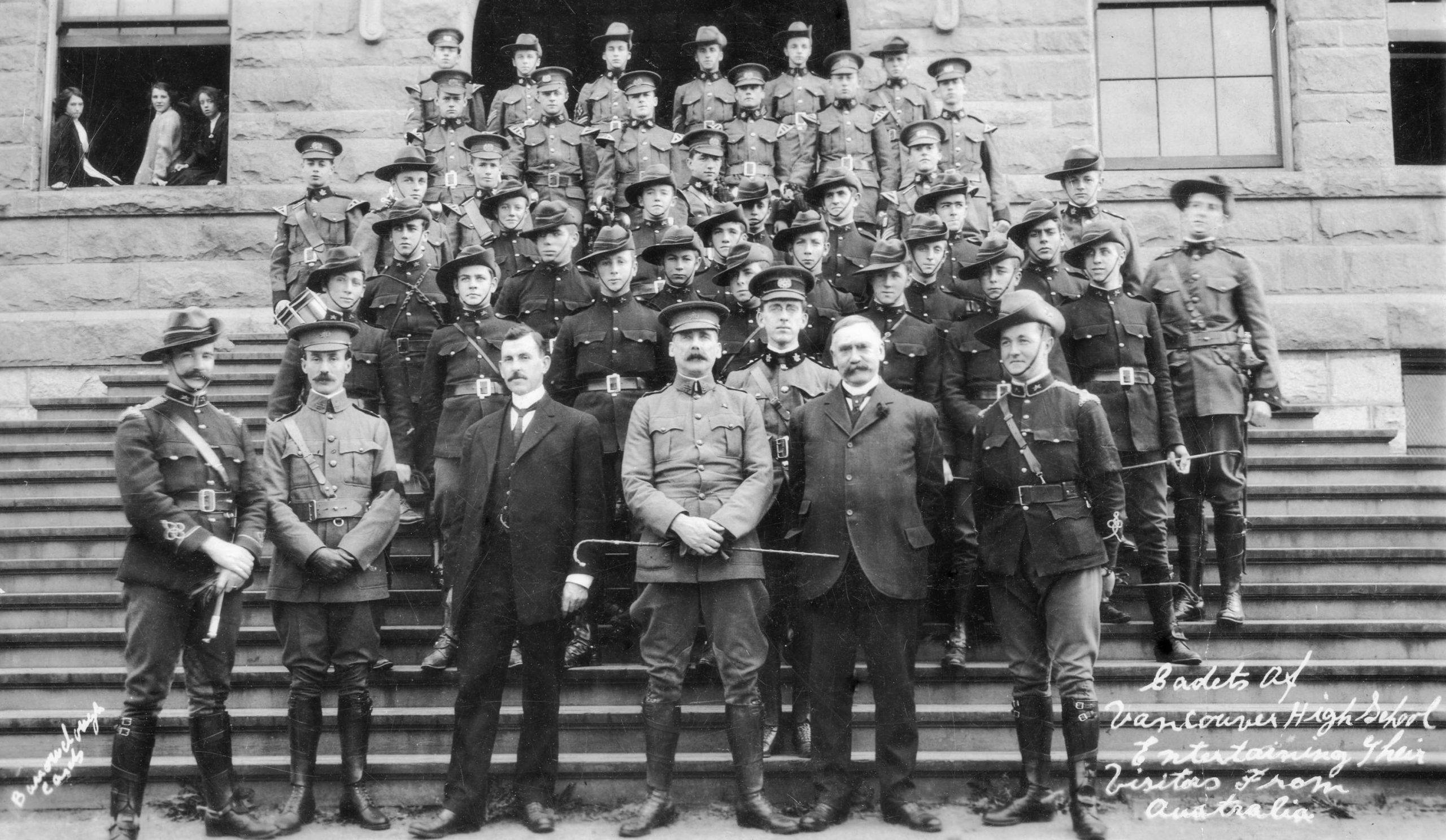 Australian and Canadian Cadets on the front steps of King Edward High School (1911).

Parents and other well-wishers bid farewell to the King Edward Cadets (July 10, 1912). 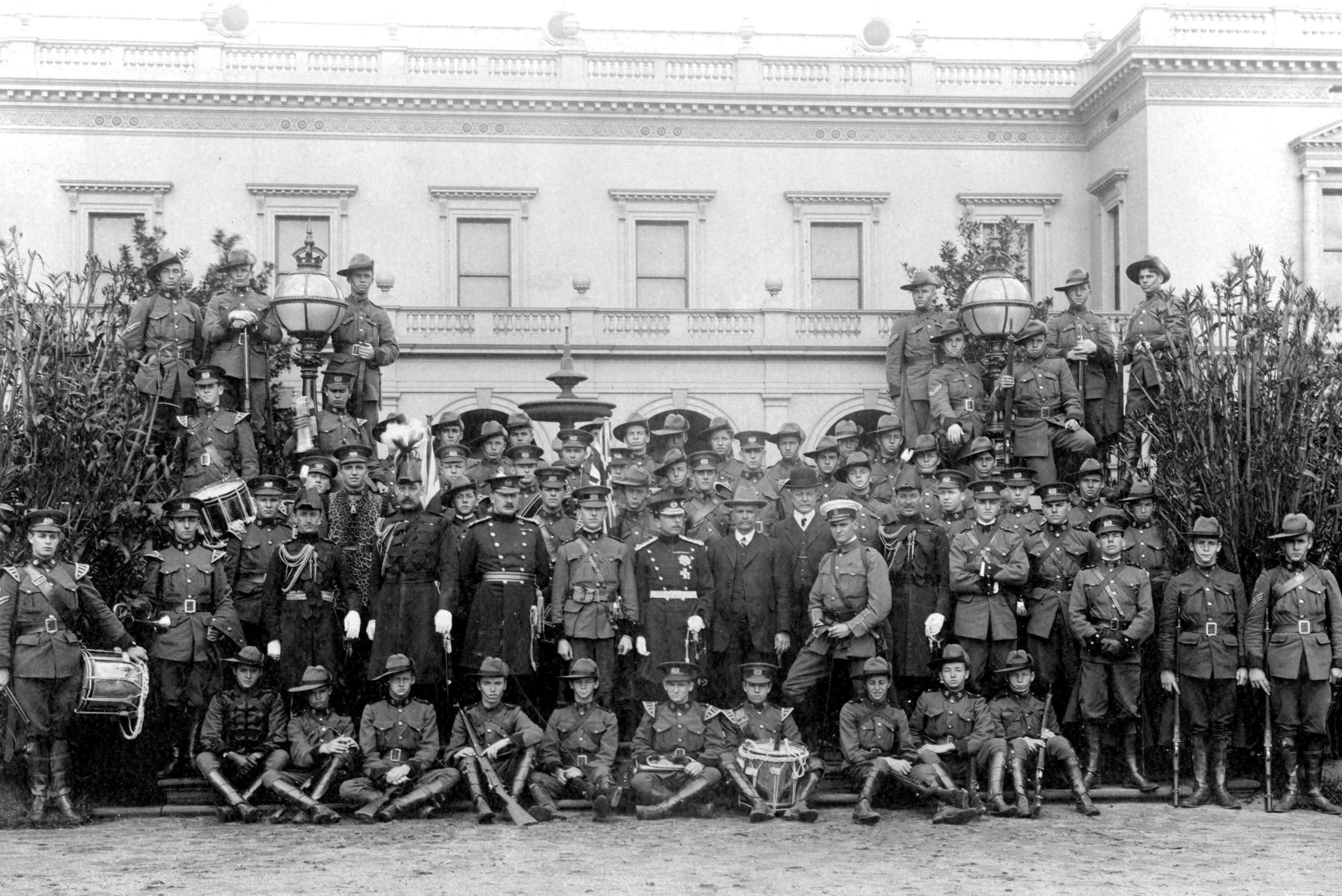 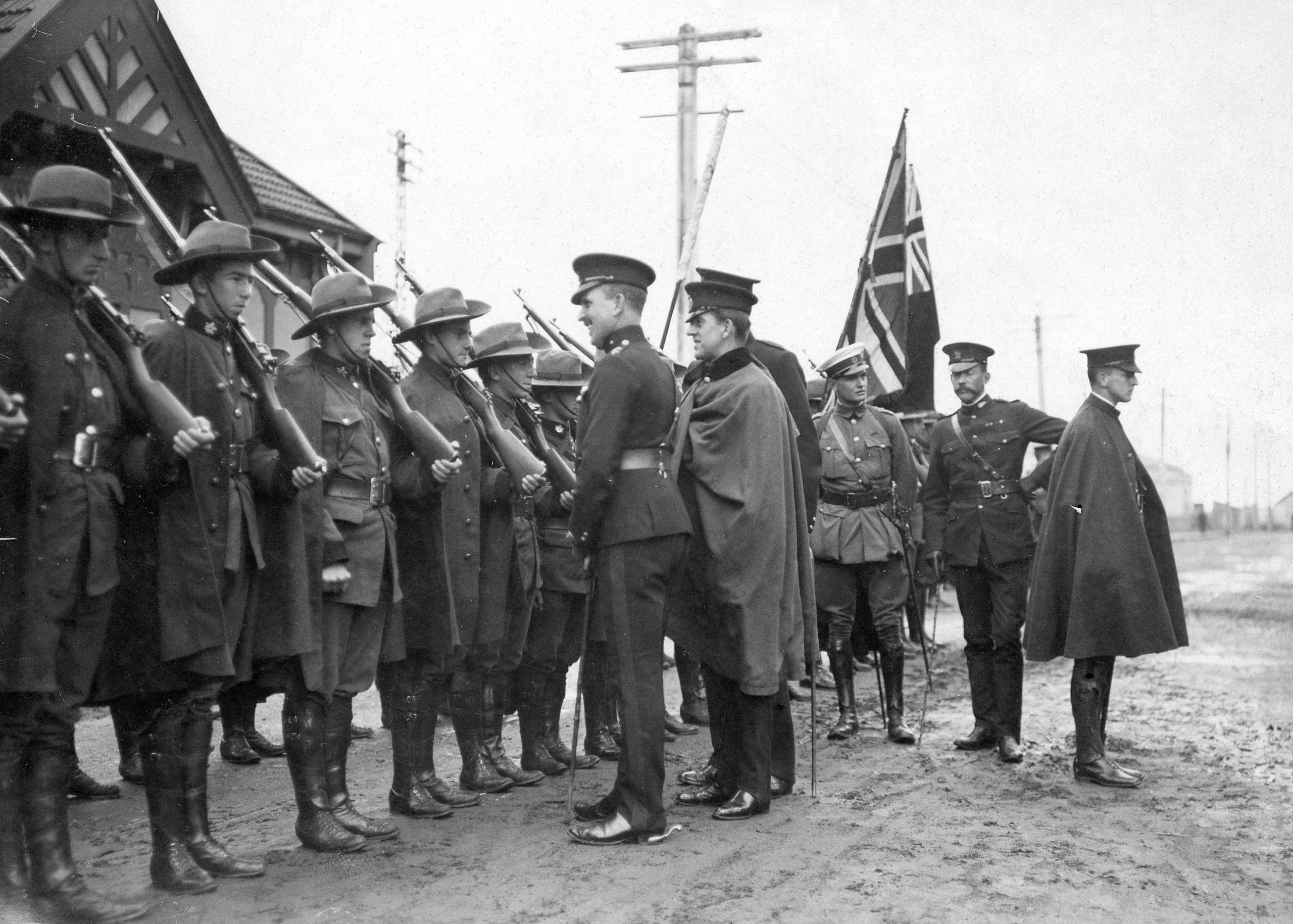 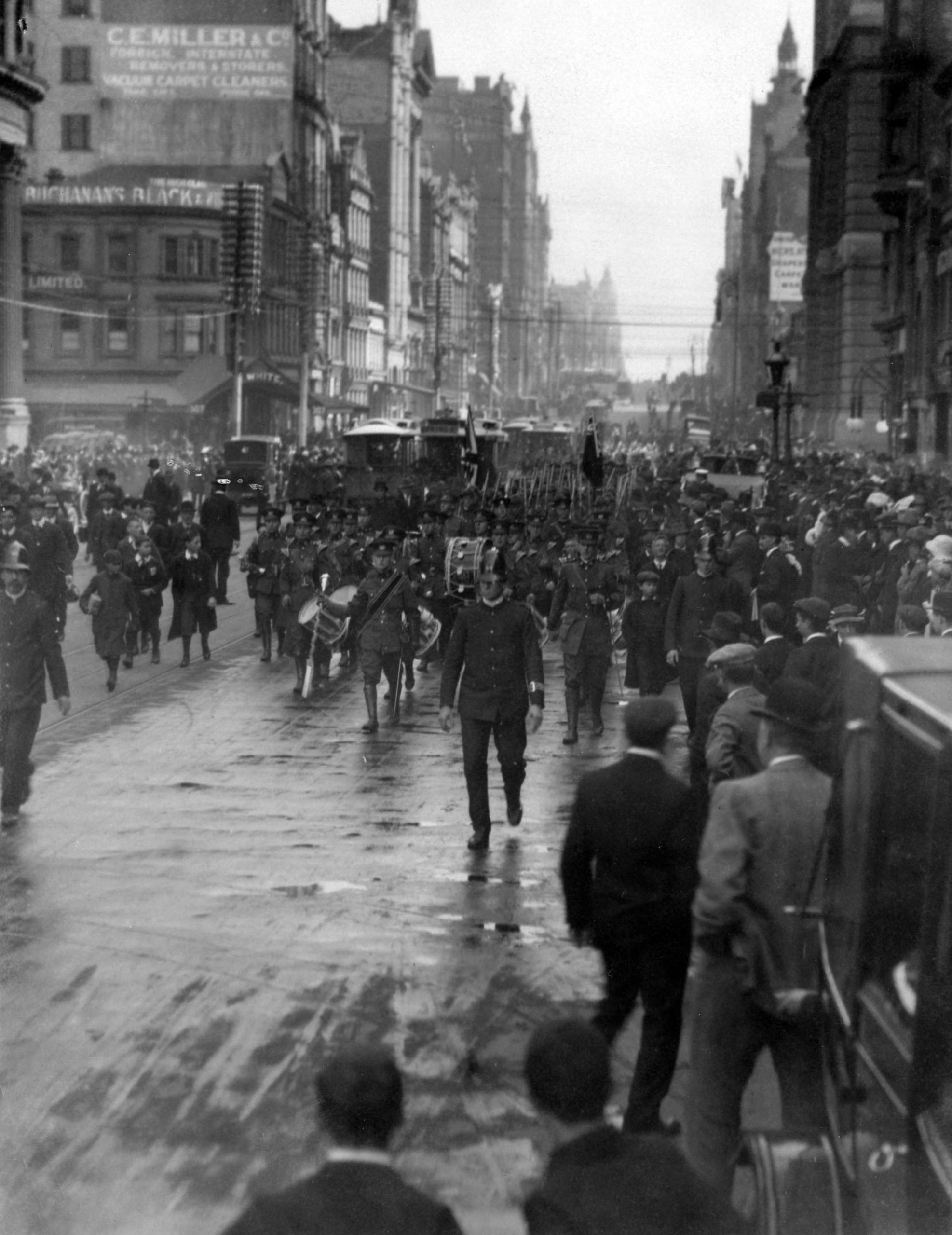 Canadian cadets on the march in Auckland, New Zealand (November 1912).