Nathaniel is a magician’s apprentice. His birthparents left him for the money. Now, he is forced to live a secretive life where magicians show no mercy, djinn are summoned in pentacles, and where your birth name must never, ever slip out. Welcome to the witty, complicated world of Jonathan Stroud’s The Amulet of Samarkand.

Nathaniel is an obedient, studious apprentice, with no experience with the outside world. His lessons? Reading, reading, reading, and yet more reading. With the three years’ worth of reading material his master ordered him to read, and the teachers who really do all the teaching, Nathaniel feels as if his master has taught him, well, nothing. But Nathaniel is a polite boy, and sticks to his reading without question, memorizing his lessons on magic with incredible speed.

Until one day, Nathaniel’s master calls for him, and Mrs. Underwood tells Nathaniel that his master had guests over, and wanted to show him off. Nathaniel had been excited, nervous, and scared, and was ready to shine. But what Nathaniel went through instead, was an alarming experience that he would never forget: being mortified by Simon Lovelace in front of dozens of magicians. Filled with childish hate, Nathaniel waits a whole year to cook up a sophisticated plan for revenge. But he can’t do it alone.

His plan? Stealing Lovelace’s Amulet of Samarkand. He knows exactly what he’ll do with the Amulet once obtained, and how he will come to stealing the Amulet. The one thing left he has to do is summon a demon, and charge him steal it. But summoning is not simple. Determined to get revenge, Nathaniel uses his knowledge to secretively summon Bartimaeus, a djinni with a hilarious sense of humor. But one thing seems to go wrong after the other, and when Bartimaeus discovers Nathaniel’s birth name, Nathaniel just might have to be smarter and craftier than ever before to get his sweet revenge.

Mostly written from Bartimaeus’s view, Jonathan Stroud created a magnificent story that really made me chuckle all the way to the last page. I really like the author’s use of footnotes, because they gave me a little background or meaning for some of the words that would otherwise leave me befuddled. The content in the book contains information on magic and wizards that you probably never heard of before. (Even I honestly did not know that dginn could be summoned, and used some of my knowledge from Disney’s Aladdin as a reference.) Anyway, this book was so much fun to read, and I recommend you read it if you like other fantasy books such as Kendra Kandlestar, Magyk, and Inkheart. The book always takes unsuspecting turns, and in the end, creates the unlikeliest of friendships. So what are you waiting for? I charge you to read the book!

*Hikari is a former Quilchena student and library monitor

Kiki Strike: Inside the Shadow City by Kirsten Miller

THIS REVIEW WAS SUBMITTED BY HIKARI*

Are you a brave, witty girl, tired of boring Girl Scout meetings? Come join Kiki Strike and the Irregulars! (Or read the book rather.)

Ananka Fishbein is your average 12-year-old girl. Except for the fact her house in NYC has a built in library, and that she has the ability to see how a city might’ve looked like thousands of years ago. Normal right? Wrong.

When Ananka discovers a sinkhole right in front of her apartment building, things start to get really strange. A muddy, short figure comes out of the hole, and Ananka, as a courageous girl, goes down into the hole to check it out. Down there she discovers an underground world, undiscovered for countless years. Determined to find out more, she visits a nearby map store to see if they have any information. A mysterious lady shows her the Marble Cemetery instead, and Ananka spots the short black figure again. Could it be the same one as in the hole? And why does it seem so familiar?

When Ananka follows the creature, she finds an address to meet Kiki Strike, a mastermind detective girl with a dozen secrets. Ananka learns that Kiki is busy gathering a group of six super talented Girl Guides, called the Irregulars, to help her explore the Shadow City. But Kiki seems to have a different side plan, and it’s up to the Irregulars to sort it all out.

Join Ananka and the Irregulars as they explore the Shadow City, and get caught up in an adventure like never before.

Kiki Strike: Inside the Shadow City is probably one of my favourites in the Quilchena Library. Just when you think you pretty much know who’s good and who’s bad, the plot takes another twist, and keeps coming back to surprise you. There’s a lot of information in the story that often changes, so make sure you understand what’s happening when you read it. This book was cleverly written, and is a definite page-turner. If you like books about brave, unique girls and amazing adventures, this one is definitely for you.

*Hikari is a former Quilchena student and library monitor

True (…sort of) by Katherine Hannigan

I don’t usually read two books by the same author back-to-back. There are SO MANY books out there to read and I often want to move on to something new. However, when I finished Ida B by Katherine Hannigan and looked around for what to read next, I found myself choosing another book by the same author.

This story is unrelated to Ida B but still has Hannigan’s style. I appreciated the way she wrote about Delly, who starts to doubt that she is a good person because of how often she gets into trouble. It made me think of people I know who get into trouble a lot at school.

True (… sort of) is about Delly, who seems to fall into trouble more easily than she falls out of bed. Her heart is often in the right place and her spirit for adventure is strong but she acts before thinking about how her actions might look to others. This tendency tends to land her in hot water.
One day a new kid shows up in her class. Ferris Boyd is a mystery, but is maybe the only person who can save Delly from her terrible tendency for trouble. The problem is that Ferris Boyd may have a way deeper set of troubles than Delly can imagine.

Ida B by Katherine Hannigan

da B lives with her parents in her valley with her apple trees and her mountain and everything is perfect. Suddenly, everything changes. Ida’s mama gets sick and promises are broken and Ida’s heart turns small, and hard, and cold.

This story is told from Ida B’s perspective. Her voice and personality fill every part of the book and she made me laugh more than once. I really liked the way author Katherine Hannigan described Ida B’s emotions. The descriptions of how Ida B interprets the events in her life and her reactions to them are unlike other stories and seem very honest.

You will like Ida B. if you like quirky and independent characters who create their own adventures.

The weather is getting cooler. I LOVE going for an autumn walk and then curling up inside with some tea and a book.

I follow Brightly.com for their book suggestions and for their ideas to make reading even MORE fun. This month they have published an October Reading Challenge that you can download from their website. Give it a try as a family! I love reading challenges as a way to integrate reading into other activities, and to stretch myself as a reader. (There will be more posts about reading challenges coming up.) 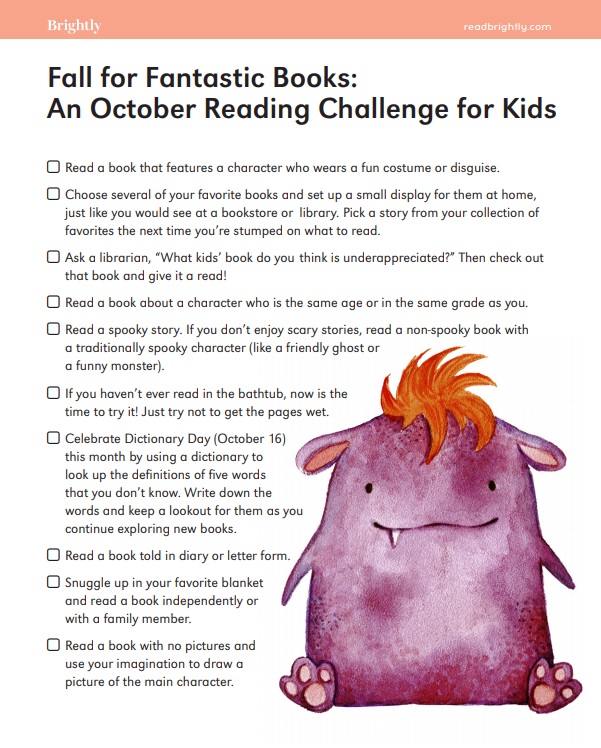 Willow Chance is very, very smart. She has just started middle school when her life is turned upside down. Now she has to figure out how she is going to continue to go on living when nothing seems that important anymore. Luckily, hope comes from the oddest places.
7 reasons to read this novel (from the book jacket): Friendship, Oddballs, Hobbies, Laughing and Crying, Miracles, Family, and Willow Chance.

Families! Have you seen the Quilchena Library Community Survey? It’s quick to fill out and will give me some insight into how I can direct my energies to build a better program at Quilchena.

If you don’t have time right now, keep an eye out at school. There is a poster near the library entrance with a QR code. All you have to do is scan the code with your smart phone.